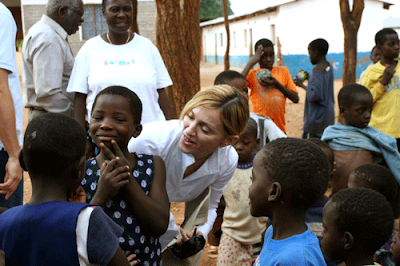 --celebrity + charity + global relief--
Efforts of "do good" celebs seem to be as common place in the media these days as the commercials for the creative projects they push. But whereas some celebrities simply lend their names to causes - others go beyond by dedicating significant time and resources behind social causes.

One recent example of celebrities who go the extra mile is the one time "material girl" Madonna, who is now planning on financing a revolutionary school for underprivileged girls in Malawi - the birth place of her adopted son David. The school is said to be in the multi-million dollar range and is additionally backed by four prominent Malawians. Although exact costs of the project are not yet finalized, it is expected to be on a similar scale to the internationally renowned girls leadership academy of South Africa spear headed by Oprah Winfrey. Winfrey's academy was estimated to cost an impressive $40 million and is said to be nothing short of state of the art from top to bottom.

Details of the Malawian school are yet to be released.

(Source: Reuters & Look to the Stars)