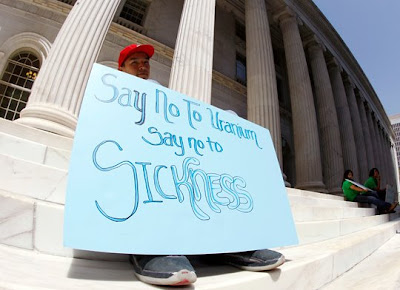 The Navajo nation, despite the lure of million of dollars, has just banned uranium mining on it's reservation which spans part of Arizona, New Mexico and Utah. The decision is part of a long and morally bankrupt legacy of environmental pollution and contamination of public health of the Native Americans.

In the 1940's to the 1980's thousands of mines operated on Navajo land with no standards or safety precautions. The federal government excused their activity as part of a need to remove fissile material from the ground for nuclear weapons to protect national security. The mines, all of which now remain abandoned have radioactive mine waste some of which was even used to built Navajo homes. People drank contaminated water, children played in contaminated dirt, and generation of humans were infected ultimately by the by product of the governments neglect.

Tribal member Larry King was a child when the land was mined. He remembers playing around the mines and the streams coming from them.

"The water tasted good, so we drank water from there," King says. "And I used to herd sheep and play on the waste pile down there

In recent years the government has attempted to reconcile the problem by supposed clean up's. In Coyote Canyon, a remote part of New Mexico, the EPA recently stepped in to remove radiation by removing 6 inches of topsoil that they referred to as "time critical removal." But for area resident Teddy Nex who has lived there since returning from Vietnam in 71', the move was curious as he has endured over three decades of contamination in his home already.

Although moving from contaminated areas might be the best decision for such area residents, the cultural implications of such decisions are enormous.

"Traditionally when a baby is born, when the umbilical cord dries up and falls off, it's buried in the sheep corral," King says. "So that's how we're tied to the land. To relocate … I don't think it's in anybody's vocabulary here at the moment."

Although the neglect of government to appropriately react to the impacts of such hazards on the Navajo is despicable, it is perhaps just one sad footnote in a long history of shortsightedness and gross neglect.