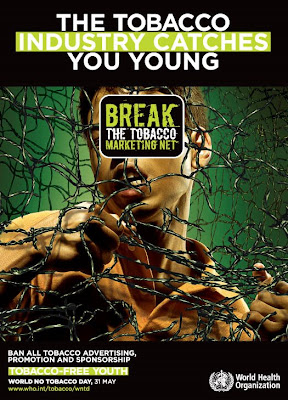 --trends + business + politics--
Today the World Health Organization took a strong stance to protect 1.8 billion young people by urging governments to outright ban all tobacco advertising, promotion and sponsorship. The call to action comes on the eve of World No Tobacco Day (on May 31st). This year’s campaign focuses on the multi-billion dollar efforts of tobacco companies to attract young people to its addictive products through sophisticated marketing.

"The tobacco industry employs predatory marketing strategies to get young people hooked to their addictive drug," said Dr Douglas Bettcher, Director of WHO’s Tobacco Free Initiative. "But comprehensive advertising bans do work, reducing tobacco consumption by up to 16% in countries that have already taken this legislative step."

Since most people start smoking before the age of 18, and almost a quarter of those before the age of 10, tobacco companies market their products wherever youth can be easily accessed – in the movies, on the Internet, in fashion magazines and at music and sports venues. In a WHO study of 13 to 15-year-olds in schools worldwide, more than 55% of students reported seeing advertisements for cigarettes on billboards in the previous month, while 20% owned an item with logo of a cigarette brand on it.

"A ban on all tobacco advertising, promotion and sponsorship is a powerful tool we can use to protect the world’s youth," said the Director-General . "Half measures are not enough," added Dr Bettcher. "When one form of advertising is banned, the tobacco industry simply shifts its vast resources to another channel. We urge governments to impose a complete ban to break the tobacco marketing net." he said.