The Color of Integrity: Food Manufacturers Ban Food Dyes to Protect Kids ...But Only in Europe 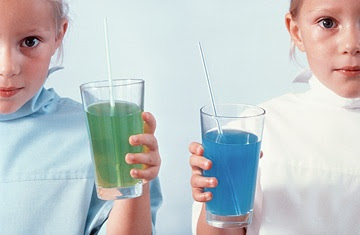 --trends + business + politics--
Since the 1970's numerous studies have shown a link between food dyes and hyperactivity and other behavioral problems in kids. For almost four decades the FDA has disputed such assertions by claiming that color additives undergo safety reviews prior to approval. But in actuality the FDA does not test artificial dyes, but instead requires the manufacturers to list the ingredients on its label and to do animal testing on their own with repeated exposure to determine whether dyes cause harmful effects.

Although the FDA reports that some individuals are sensitive to Yellow #5 and break out in hives, the agency does not agree with the conclusions about ADHD or asthma or for that matter hyperactivity (that has been asserted in dozens of studies over the years). Recently the issue resurfaced when a consumer advocacy group known as the Center for Science in the Public Interest called for the FDA to outright ban their use.

The organization went on to point out how the British government is finding success pressuring manufacturers to phase out use of such dyes. Late last year, Mars banished artificial colors from its well-known Starburst and Skittles candies sold in the UK. Northfield-based Kraft did the same in early 2007 with its British version of Lunchables.

"This is about listening to consumers," said Kraft spokesman Michael Mitchell.

Thus far, U.S. consumers haven't spoken up enough to cause big manufacturers to drop the dyes. Kraft's decision for safer dyes was based on public demand. The organization conducted extensive market research which showed that in the United Kingdom the public has a "much higher interest" in food dyes than in the United States. In the U.S consumers are more interested in calorie, fat and sodium content. So in the U.S., Kraft, Mars and others use artificial dyes, which tend to be less expensive and look more vibrant than natural colorings.

A research study at Southampton University found a statistically significant link between hyperactive behavior and the consumption of certain artificial colors, including Red 40 and Yellow 5. The petition to the FDA by the Center for Science in the Public Interest is specifically citing the colors included in these findings. In Europe this study moved The European Food Safety Authority to acknowledge a "limited evidence" of a link between dyes and hyperactivity. This recognition motivated the U.K's Food Standards Agency to recommend that by the end of 2009, food manufacturers should stop using several artificial colors. It also called for the UK to lobby for a Europe-wide ban.

So what's up with the FDA ? According to Julia Zawisza (an FDA spokeswoman), there is little cause for alarm in America.

"(We) didn't find a reason to change our conclusions that the ingredients are safe for the general population," Zawisza said. "Also note that the European Food Safety Agency has a similar view as FDA's." Uh, Ms. Zawisza - are you following the news.??? Not only had the agency admitted a link between dyes and hyperactivity, it essentially helped push forth a UK ban on dyes which could impact similar decisions throughout the EU. Even more alarming Ms. Zawisza is your sales pitch for food dye on your site (see link above for whole text),

The color of food is an integral part of our culture and enjoyment of life. Who would deny the mouth-watering appeal of a deep-pink strawberry ice on a hot summer day or a golden Thanksgiving turkey garnished with fresh green parsley?

Even early civilizations such as the Romans recognized that people "eat with their eyes" as well as their palates. Saffron and other spices were often used to provide a rich yellow color to various foods. Butter has been colored yellow as far back as the 1300's.

Is the FDA trying to equate green parsley and saffron to food dyes made from coal tars and petroleum ? Inquiring minds want to know.

"The purpose of these chemicals is often to mask the absence of real food, to increase the appeal of a low-nutrition product to children, or both," said executive director, Michael F. Jacobson of the Center for Science. "Who can tell the parents of kids with behavioral problems that this is truly worth the risk?"

To no surprise manufacturers are pushing back,

"Based on these findings, there is no need for consumers to alter their purchasing and eating habits," said Robert Brackett, chief science officer for the Grocery Manufacturers Association,. "They and their children can safely enjoy food products containing these food colors."

While the consumer advocacy group pushes for a ban, they are asking for an intermediary move that would require a warning label on foods with artificial dye.

All this maneuvering and negotiating begs the question...how is it that for thousands of years children managed to remain nourished and happy without blue cereal ? What is the battle here really all about other than protecting manufacturers and the chemical companies manufacturing the dyes. What benefit do our kids really get from purple drinks, other than creating a threshold of unhealthy perceptions on nutrition. Do dyes need to be linked to hyperactivity to be considered bad for our kids ?

Much like selling unrealistic ideas on what women need to look like by the media, we are also sold unrealistic ideas of what food looks like to our children. Neither ploy is healthy for target audience. The FDA and the manufacturers are not protecting our kids. Regardless of weather there is a link between hyperactivity or not, the concept of using additives to "sell" our children on junk food is despicable.

Color it how you will...food dyes are nothing but bad news for our kids.

Europe has stricter laws regarding food additives and the presence of certain substances in goods.

To paraphrase, if the scientific community has demonstrated that the presence of a certain substance correlates to a certain extent with the development or propensity to develop some disease (i.e., cancer), that substance will be banned and any food or object containing that substance may not be sold in Europe.

That type of law does not exist in America. In America, we require proving causation. That is, the presence of substance X causes disease Y. That is a much more difficult standard and, by necessity, requires much more time and exposure to determine the true causation of the emergence of a particular disease.

My further understanding of the matter is, despite many companies having complained about the costliness of Europe's laws, there now exists in China side-by-side factories that manufacture, for all practical purposes, identical products, with one's products destined for Europe and the other's for America. The only difference being what goes into the products (safer products for Europe).

There is a great book on this subject called "Exposed: The Toxic Chemistry of Everyday Products and What's at Stake for American", by Mark Schapiro.

PBS also ran a segment on this topic, entitled "Toxic Toys", which can be found at http://www.pbs.org/now/shows/412/

America is no longer the innovator, but a giant corporate shill. Tragic.

I would like to see the data cross-correlated with psychologists' likelihood to diagnose ADHD or other childhood behavior disorders.

Perhaps all food coloring additives do is increase the likelihood of a false diagnosis.

Also, if both America and Europe were to have exactly the same standards and react in identical fashion with identical speed to identical scenarios then there would be no control or basis for comparison.

Sorry for the impulsive double post. I'm an American. Probably have ADHD. Give me my kool-aid plz.

There's a similar story running along Bisphenol A (BPA) a compound used to solidify plastics (epoxies), such as bottles.
Pretty scary effects of BPA on sexual hormones were described by independent groups. Industry-backed up groups showed no effects.

Who can we believe, industrials or little university groups???

To date the most sold baby bottle contain BPA. Your dearest Nalgene too. Some brands started developing "bpa-free" plastics... The FDA did not find any direct causality and thus did not ban BPAs. But Canada did and Europe is working on it. So again who should we believe :)

niko, I agree that it can be confusing when two groups say different things. My personal two cents on this is that industry has proven time after time that their tests are anything but partial. Big Tobacco's tests or Dow Chemical's are some shining examples.

I also think the EU and Canada, having socialized medicine, have a much more vested interest in keeping their people healthy than the US. Just a theory...