The Risky Side Effects of Driving:
A Look at Recent Studies on Traffic Pollution 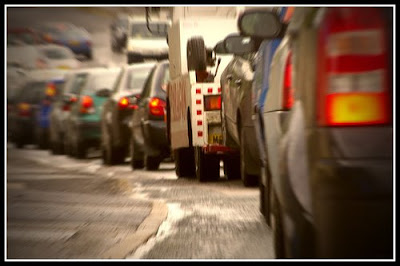 
Several new studies in just the last few weeks have pointed out that driving is far more hazardous than one considers when getting in the car. From eczema to blood clots the potential issues go beyond the usual anticipated dangers of the road.

A new German study is making news and bringing to light other recent research, by citing that traffic pollution can be directly linked to childhood allergies, amongst other conditions. The study published in the American Journal of Respiratory and Critical Care Medicine followed 3000 healthy kids from all over Munich for six years from their time of birth. The researchers mapped residential addresses of the kids in relation to busy roads (a busy road being one used by 10,000 cars each day). What they found was a clear and inarguable link between kids living closer to busy roads and higher rates of asthma, hay fever, eczema or other allergies. In fact, kids living 50 yards from a busy road were 50% more likely to develop these conditions then kids living 1,000 yards away.

"We consistently found strong associations between the distance to the nearest main road and the allergic disease outcomes," Heinrich, who led the study.

These finding are hardly new. Just recently a similar study came out of Stockholm. The study known as the BAMSE project monitored 4000 kids and found that children who were exposed to high concentrations of pollutants ran a 60 per cent higher risk of suffering of persistent asthma symptoms. Respiratory function was also adversely affected, and the children were much more likely to be allergic to airborne allergens, particularly pollen.

In yet a third study released last month, the scientists from Harvard School of Public Health have found that breathing in air pollution from traffic fumes can raise the risk of potentially deadly blood clots forming in the body.

Traffic pollution continues to be not only a major environmental hazard but a public health hazard. With no shortage of science to back up claims, living as far as possible from busy intersections and staying off the roads to curtail traffic pollution, seems to be the only immediate solution. Perhaps sharp increases in gas prices make for harder economic times, but if they keep consumers at home more - and off the roads, it might prove to be an unexpectedly good thing for all of us, after all.

Yes, you are right.

Air pollution is too heavy.
People who leaved in the city from the beginning of their life seem to feel at home, if they smell smoggy air.

The same smoggy air is an indication of cancer, asthma and skin problems.

Our only hope is that gasoline gets very expensive soon, while the cost for electric cars falls down rapidly.