The Greening of the Auto Industry:
New Trends Point to a Promising Future 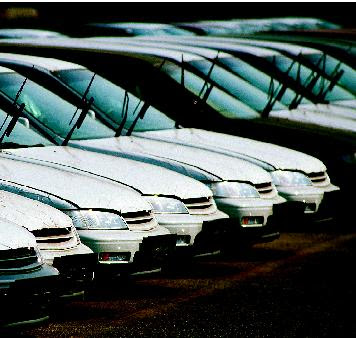 Beyond concept cars, the auto industry is waking up to the need to get clean about dirty emissions. If the environment didn't give automakers a good kick in the pants - the rise in gas prices, sure will. Consumers are feeling the pinch, and realizing that getting a greener vehicle might not only be good for the planet - but also their bank accounts. Automakers are responding to changing attitudes and shifting market demands.

Just today Toyota announced that it has developed a new zero-emission fuel-cell vehicle that has a longer cruising distance than previous models and can operate in freezing temperatures. Japanese companies have been working to create a viable zero-emission car running on fuel cells, which produce electricity through a chemical reaction between hydrogen and oxygen, leaving water as the only by-product. Previously the company had already made moves towards greener alternatives with its highlander-based fuel cell hybrid vehicle (FCHV). Honda also made news with it's plans to lease at least 200 fuel cell vehicles in the U.S. over the next three years. The leases on the car, called the FCX Clarity, will be offered only in California, where a network of hydrogen refueling stations is being installed.

Even General Motors has stepped in with an announcement that it will shift production away from large SUVs toward smaller, more fuel efficient vehicles — and close four factories in the process. The move came in response to fuel prices and an accelerated consumer shift to cars and crossovers. The company also announced that it will go ahead with plans for an electric car, known as the Volt, which is expected in dealerships by 2010.

Are automakers simply doing the right thing - or is the public demand shifting, and the industry responding ? No doubt the mass market is catching on that driving is an expensive and dirty business, one that for many is simply too outdated and pricey to support. The trend towards greening of the auto industry is inevitable. The International Energy Agency recently estimated that nearly a billion electric or fuel-cell vehicles may need to be put on the road as part of an "energy technology revolution" to halve greenhouse gas emissions by 2050.

"This is a challenging and dynamic time for the auto industry. Clearly, the political, economic and regulatory landscape in which you operate in the US and globally has changed dramatically over the past year. The reality is that the pace of change will not be letting up anytime soon"

Oge said that climate change and energy insecurity were driving the change in the transportation sector.

"The best scientists have determined that we, globally, by 2050 must reduce greenhouse gases by 50-80% of the 2000 levels. I asked [OTAQ] staff to determine what that means for personal vehicles, if the personal vehicle sector of industry was to do its fair share for 2050 reduction. The analysis that we undertook was a more modest reduction [than the 50-80%]—20% by 2050 from 2000 levels.

It would mean 75 mpg and greenhouse gas equivalent vehicles. That means that sometime in the 2030s, we need to begin introducing vehicles meeting that kind of fuel efficiency performance.

We need a united and coordinated strategy between government, industry and consumers. It requires a technology revolution, and presents an enormous opportunity. I believe that the transportation sector can reclaim the mantle of the country’s economic growth engine over the next decade if the right investments are made. It’s up to you to make the investments and grow the revolution."

As the entire industry works to redefine itself, consumers stand nothing, but everything, to gain - from more money in their pocket to cleaner air for their kids to an environment that sustains all living things. The greening of the car industry just might be the most influential trend that happened to the biz, since the Model T.

Too true: It is too much to expect that everyone will care for the environment and mend their ways. Gas scarcity and rising prices are more likely to make people shift of greener modes of conveyance. This will then make the auto giants to invest in the requisite R&D which they can well afford.