The Greening of the Outfield 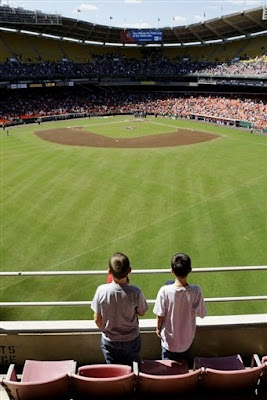 --Feature: "Greener One w/Molly Hovorka"--
Some colleagues and I went to a San Francisco Giants game earlier this month on what was the hottest day in the city in more than 30 years. Our tickets had us seated right in the direct sun, and we, like many other fans, migrated up into the shady nosebleed sections as the game wore on.

I haven’t been to a sporting event in years, and therefore haven’t given a lot of thought to their environmental impact. Looking at the emptying seats, I was struck by all the trash left behind and couldn’t help but wonder about (A) the workers who would have to clean up in the blazing heat, and (B) whether any of it would be recycled. Imagine cleaning up an entire stadium: how scrupulous would you be about separating your plastics? Of course this train of thought led to others, such as all the energy used to run the concessions, all the water being flushed away after an afternoon of beer drinking, all the lighting that goes into a nighttime game.

By coincidence, I read a Newsweek article the very next day about the new Washington Nationals ballpark and other greenities in Major League Baseball. The $611 million Nationals’ stadium is the first such building to be LEED certified, though the Minnesota Twins’ new stadium will have a higher level of LEED certification when it opens in 2010. Among the features of the Nationals’ stadium:


Even more exciting, building the stadium to LEED standards resulted in just a 2% hike in construction costs, proving that building with a mind to the environment is very feasible.

The Natural Resources Defense Council has been lobbying sports teams and facilities to go green since 2002. Some successes to date include:


That cheer you just heard up in the nosebleeds? That was me, making my feelings known about these efforts!


Molly Hovorka is a co-founder and the marketing director of Greener One, an eco-ratings community that gives you the tools and information you need to make greener choices. In addition, Molly writes the Greener One blog on greenerone.com, as well as the Greener One column on The Lohasian - both providing product reviews from a green perspective as well as environmental news and commentary. To compare products or to share your product knowledge with other conscious consumers, visit GreenerOne.com.