The Plight of Uncontacted Tribes,
Beyond the Headlines 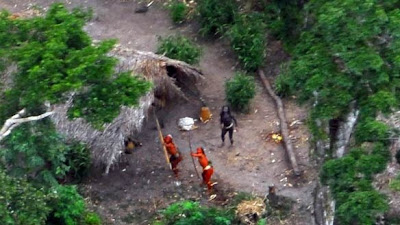 --celebrity + charity + global relief--
Yesterday the Peruvian government announced that it will send a team to investigate the plight of a tribe of uncontacted Amazonian Indians in Brazil near the border with Peru.

The tribe made international headlines recently when photos were taken by the Brazilian government from the air, and showed some members of the tribe - their bodies painted red and black - firing arrows at a photographer in an airplane. The Brazilian government said they took the photos to prove that dozens of isolated tribes live in the region, on both sides of the border.

The objective of the team expected to make contact with the tribe, is to investigate whether the tribe moved their thatched hut village across the border from Peru to Brazil because of pressures brought on by the illegal logging industry. But, the intrusion of the Peruvian investigatory team offers extreme health risks to tribal members who have no immunity for something even as simple as a cold. Such previous contact has proved disastrous, in some cases nearly wiping out entire tribes.

Over one hundred tribes around the world choose to reject contact with outsiders. They are the most vulnerable people on the planet. Here is their story in an illuminating short documentary film in two parts, produced by Survival International, the only international organization supporting tribal peoples worldwide.

For more information, or to support, uncontacted tribes, go to the Survival International Site.