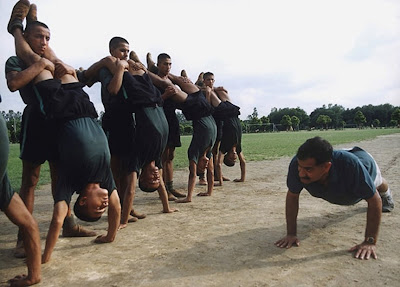 --body + mind + spirit--
Yoga is more often associated with relaxation and peace, then target practice and army training - but this might soon change, thanks to the Indian army, the second largest army in the world after China.

The army is now poised to adopt the ancient practice after the huge success shown from a three month trial by new soldiers at the Bengal Engineering Group. The group did 50 minutes of yoga a day combined with 40 minutes of traditional exercise and had shown steadier hands, stronger grips and leaner muscles than peers who underwent the grueling 90-minute military work-out instead, according to a study.

"The yoga group showed an improvement in skilled activities requiring coordination and concentration, as well as muscular strength and endurance," Dr. Shirley Telles, the principal investigator on the project, said. "This would be especially useful for activities such as shooting at a target."

What next meditation for better nuclear weapon development ? Or how about chanting for improved skills in interrogation. True Yoga, has countless benefits...perhaps better combat was just one we might have overlooked.