The Case for Crises:
Experts Believe Disasters Might Be Good For Us 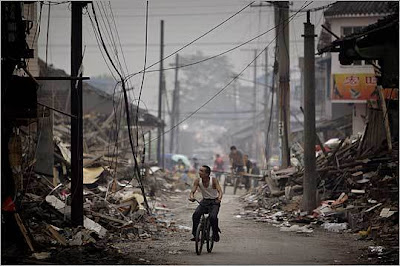 This morning, over a much needed cup of coffee (after a late spent reflecting on a rather tumultuous last few weeks of life) I came across an article that was well, perspective shifting. The piece, from the Boston.com titled "How Disasters Help" explored the cultural value of natural disasters.

"Some economists argue that hurricanes, earthquakes, floods, volcanic eruptions, ice storms, and the like, despite the widespread destruction they leave behind - indeed, largely because of it - can spur economic growth. Rebuilding efforts serve as a short-term boost by attracting resources to a country, and the disasters themselves, by destroying old factories and old roads, airports, and bridges, allow new and more efficient public and private infrastructure to be built, forcing the transition to a sleeker, more productive economy in the long term."

It's hard to look at faces of crying mothers, injured and dead children, such as those that dominated the press after the earthquake that struck China's Sichuan Province in May, and imagine anything good coming of it. An estimated 80,000 people died. A horrifying nightmare of unimaginable proportion, how could anyone see benefit to such a loss ? But experts can - and do, and have discovered that our darkest moments as a society might actually have a higher purpose.

"Mark Skidmore of Michigan State, along with the economist Hideki Toya of Japan's Nagoya City University, published a 2002 paper in the journal Economic Inquiry that mapped the disaster frequency of 89 countries against their economic growth over a 30-year period. The paper controlled for everything the authors could think of that might skew the findings - including country size (large countries would presumably experience more natural disasters), size of government, openness to trade, and distance from the equator. Skidmore and Toya found that, in the case of climatic disasters - hurricanes and cyclones, as opposed to earthquakes and volcanic eruptions - the more the better: nations with more climatic disasters grew faster over the long run than the less disaster-prone"

I couldn't help but see the parallel between humans who endure more trials and challenges in their lives versus those who endure less. Don't we also "grow faster" if we are forced to deal with crises ? If we don't "sink" as they say don't we automatically have to learn to "swim ?" And those who are faced with sinking more often - generally have to learn how to swim better, faster and for longer distances. If you have ever had a conversation with a war survivor, or a grandparent who lived in the Depression, or even a child who endured the pains of an abusive home - those who didn't drown, were certainly "Olympic swimmers" in their own right.

"When something is destroyed you don't necessarily rebuild the same thing that you had. You might use updated technology, you might do things more efficiently. It bumps you up," says Mark Skidmore, an economics professor at Michigan State University. "Disasters help people think about things differently."

True on a social level and on a personal level - crises might actually be good for us. Through the pain and suffering of our own natural disasters we live and learn and begin to think and see things differently. Perhaps we all dream of the idyllic stress-less worry free life, but in reality, in nature there is a case to be made for crises.

It's true that natural disasters have several benefits. They restore ecosystems providing nutrients from volcanoes. They keep the human population in check when we are on the verge of exploding. Seeing a human face on disaster is heartbreaking but it is a part of the natural cycles of life.