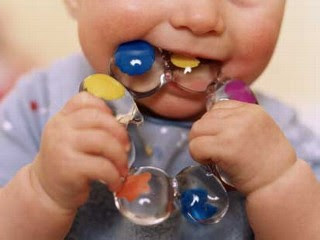 Good news for frustrated and frightened parents - Congress has finally agreed to ban certain toxic chemicals from their kids toys. Legislators are proposing that statutory language be added to the Consumer Product Safety Commission Reform Act that would prohibit the dangerous toxins in children's products.

On Monday, both House and Senate agreed to prohibit three types of phthalates (DEHP, DBP and BBP) and to outlaw three others (pending an extensive study on their health effects on kids and pregnant women). This ban will be effective within six months. Big stores like WalMart and Target have already promised a ban of children’s products with phthalates from their stores, beginning in January 2009 (conveniently after the holiday season).

This development came after a swell of protests from parents, consumer groups and health experts over the link between Phthalates and various health risks including developmental and reproductive health effects, including low sperm counts. Scientific research has repeatedly shown that phthalates act as hormones and children can ingest these toxins by acts as simple as chewing on their plastic toys.

Studies out of the University of Rochester Medical School found that male babies born to women with high levels of phthalates in their blood exhibited changes related to low sperm count, un-descended testicles and other reproductive problems. Other studies have connected some phthalates to liver and kidney cancer. Health experts argue that dangers may be more significant from cumulative exposure, because phthalates surround babies not only in toys and products but also in breast milk if the mother has been exposed to the chemicals. Several phthalates have also been listed as potential endocrine disruptors.

In 1999 the European Union banned six phthalates including di-(2-ethylhexyl) phthalate (DEHP), dibutyl phthalate (DBP), and benzyl butyl phthalate (BBP), along with diisononyl phthalate (DINP), diisodecyl phthalate (DIDP), and di-n-octyl phthalate (DnOP). Senator Dianne Feinstein (D-Calif.), who sponsored the measure, has said that she hopes that this positive development is a first step towards a model closer resembling that of the EU, where industry must prove the safety of a chemical before it is allowed on the market.

“Chemical additives should not be placed in products that can impact health adversely until they are tested and found to be benign,” she said.

Over 1.4 billion dollars worth of phthalates are manufactured in the U.S. annually and many believe the industry has just taken a major blow.

I'm so glad to hear that this is happening. Children need to be protected from long-term effects of phthalates. Maybe it will also start some governmental action on things like BPA, as well.