Inside the Mystery and Hype
of the Tumbling Puffin Population 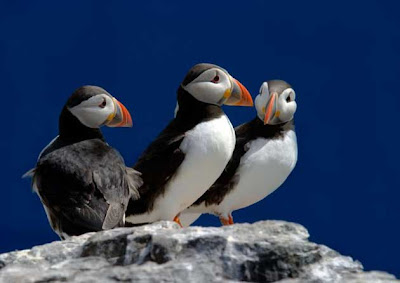 "Mystery of the Tumbling Puffins" - might sound like the title of an edition of "Goosebumps" mystery series for kids, but actually was the headline of a recent article by the Independent. I couldn't help but read it. Sweet little puffins - so chubby and playful they are the Koala of the sea. Could they too be paying the price of the changing climate?

According to the article the puffins population in England's largest colony, on the Farne Islands off the Northumberland coast, have mysteriously tumbled by a third in the past five years. The mystery point to a decline from 55,674 in 2003 to 36, 500 this year. A team of nine National Trust wardens across eight of the islands,did the count, and the result came as a shock.....after all, stocks of sand eels, the staple food of puffins in the summer, are in good supply around the islands and there is a lack of ground predators, creating a good environment for puffins to breed. What could be the cause ? I scanned each paragraph awaiting the likely culprit..it was inevitable...and there it was!

"This dramatic drop in numbers would suggest there is something happening at sea during the winter, for example, an intensification of storms as a result of our changing climate which could affect the ability of puffins to find food."

I don't know the exact cause for the decline of our adorable little friends - but neither do the "experts" it seems. I think it has become a default assumption that almost any wildlife population decline is a result of the environmental crises...its the easy, trusted heart string puller of a growing population of green enthusiasts. But I wonder - haven't populations of animals been declining and dying off since the beginning of time ? Unless you're Creationist you probably have to assume that we did not evolve as a species, nor saw the evolution of various sister species, without the sacrifice of others along the way. I mean, how do we know which species of plant or animal life is dying off because of the damage we wrought on the environment, and which population simply...had it's time?

We should be getting increasingly more careful about turning to the climate crises as the answer to all of the world's great problems...too much hype is never good for anyone or anything - especially on an issue that is so complex scientifically, politically and philosophically that mainstreaming it for commercial consumption will inevitably pervert the reality of what it is.