Sea Shepherds Collide on the Seas
in Explosive Whaling Protest 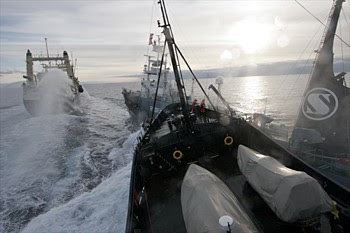 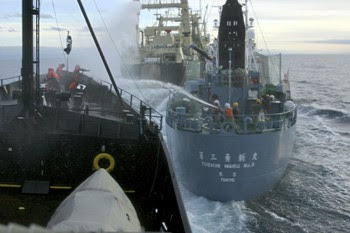 Japanese whalers and conservation society and radical anti-whaling activists, Sea Shepherd, collided in the Antarctic Ocean today while the activist group was trying to stop the hunters from pulling one of their kills out of the Ocean. The incident is being condemned by Tokyo as "appalling and unforgivable." No one was injured.

Activist Paul Watson of the Sea Shepherd Conservation Society said his boat was chasing the Japanese ship dragging a whale on board when another Japanese boat shot in front of his vessel, causing a collision. Watson said it had no choice but to hit the Yushin Maru No2 after the Japanese whaling vessel made a sudden attempt to block the path of its ship, the Steve Irwin.

"We've been in pretty intense confrontations with them for the past few days," Paul Watson, captain of the Steve Irwin, said. "We were in the process of blocking the transfer (of a dead whale) from the Yushin Maru No2 when the Yushin Maru No1 moved directly in front of the bow to block us.

Earlier in the day, Watson said, the Japanese hurled pieces of blubber and whale meat at his ship.

"We can see the blood pouring out by the barrel," he said as he watched the Japanese haul another whale onto their vessel.

"We told them to not continue their illegal whaling operations and that we would be blocking the stern slipway of the factory ship," said Watson. "They decided to test our resolve and apparently expected us to retreat when they charged in ahead of us to make the transfer."

In a statement, the Institute of Cetacean Research - the Japanese government-affiliated organization that oversees the hunt - condemned the protesters' actions, characterizing the collision as a "deliberate ramming" that occurred while the Japanese were trying to load a whale on board one of their ships.

Shigeki Takaya, a Fisheries Agency spokesman for whaling in Japan, called the incident "appalling and unforgivable."

"We will ask concerning countries, including Australia, to immediately stop them from carrying out such horrendous acts," Takaya said.

Sea Shepherd representatives who were involved in the collision elaborated on the aggressive tactics of the oppositions, including the difficulty the crew had in controlling their ship, The Steve Irwin, after being barraged by metal objects, water cannons and suffering disorientation caused by LRAD acoustic weapons that the whalers were using against the conservationists.

"I was dazed by the sonic blasts being used on us at close range." said Captain Watson. "I have to admit it was difficult to concentrate with that devise being focused on us."

"I've never felt anything quite like it," said Emily Hunter from Toronto, Canada. "It penetrates the body and you can feel your muscles vibrating. It made me dizzy and left me somewhat dazed."

Japan plans to harvest up to 935 minke whales and 50 fin whales this season. Under International Whaling Commission rules, the mammals may be killed for research but not for commercial purposes. Opponents say the Japanese research expeditions are simply a cover for commercial whaling, which was banned in 1986.

"We have repeatedly asked the Dutch government to stop them from harassing us, but so far it's been so unsuccessful," Tsuruoka said.

The protesters set off from Australia in early December for the remote and icy Antarctic Ocean, chasing the whaling fleet for about 2,000 miles (3,200 kilometers) before stopping two weeks ago in Tasmania to refuel. The group found the whalers again on Sunday and resumed their pursuit.

Watson, who regularly vows to do anything short of deliberately hurting people to stop whalers, said Friday that he and his crew have no plans to turn back - and will continue to chase the whalers until their fuel supplies run out.

"Seeing the long prolonged agonizing murder of that defenceless whale has made me angry," said Captain Paul Watson. "Very angry. We are going to make a stand here today to shut this obscenity down. It will be dangerous but we did not come down here to witness the slaughter of whales, we came down to stop the killing. We have a very big disadvantage," continued Watson. "Japan will defend the violence of their mad dog killers. Our governments don't have the guts and will condemn us for defending ourselves and the whales. Sometimes you just have to say, what the hell and make a stand and that is what we intend to do here today. We intend to make a stand."

GO SEA SHEPHERD!!!!! GOD BLESS YOU AND YOUR CREW FOR YOU BRAVERY!!!

The whale murders are TERRORISTS in the sea. The whale killers need to be prosecuted for their violence and using the LRAD and throwing metal at the Steve Irwin ship, is pure violence!!!! Shame to all the world governments that just sit back allow this pure evil, and arrogance to go on by these whale killers!!! They do nothing but plunder and exploit and then LIE about everything they are doing!

I watched one of the shows where the captain of the anti-Japanese ship ordered two of his underlings to illegally board the Japanese ship. They did so, climbing from their boat over the railing.
The captain of the two boarders then promptly called the press and Australian Navy and declared that two of his crew had been taken hostage by the Japanese crew. He was quite proud of himself for doing so. In fact, it was filmed for the public to see. A proud lie is a badge of honor to these misanthropists.

Because of this and other examples where they have attacked shipping and then claimed to have been attacked, I simply do not believe a word coming out of their mouths. Anyone who does is a fool.