--art + architecture + design--
From red light to... red paint, Amsterdam is cleaning up its infamous prostitution districts by giving it back to artists. Art installations and avant garde gowns now hang in windows formerly occupied by "working girls."

To fight organized crime and clean up Amsterdam's center, authorities have set sights on halving the number of brothels and marijuana selling coffee shops, which have been a major pull for tourists to the city, and limit prostitution only to certain areas. Recently the government took measures one step further in their fight against forced prostitution and human trafficking by way of registration requirements for prostitutes and stricter permit rules for brothels, escort agencies and massage salons.

But while the prostitutes' union was less enthusiastic about artists taking over their turf, a spokeswoman for the union said that prostitutes and artists are used to living side by side.

"Prostitutes and artists can live together, like they did in Paris in the 19th century," said Metje Blaak, spokeswoman for the Rode Draad union, although she added that she did not want to see artists taking over the district.

Prostitutes and their experiences have often inspired artists, including 19th century French painter Henri de Toulouse-Lautrec, who used Parisian prostitutes as models for his posters and paintings.

In the mid-1970s, Serbian artist Marina Abramovic exchanged roles with a prostitute in Amsterdam for a few hours and recorded both her experience and the experience of the prostitute for a photo exhibition.

The Red Artists-In-Residency (Red AIR) project provides Dutch and international artists with a space to work on projects exploring the role of art in areas undergoing urban transformation.

Individual projects include turning a former prostitute's room into a public library, displaying photos of modern architecture in the window of another, and creating posters and badges with provocative statements such as 'I Revolt'.

Red AIR, which is curated by Angela Serino, plans a final exhibition in the second half of this year and is part of the city's Redlight concept -- a program aimed at diversifying the district, which has also included the fashion and a jewelry design project.

There is something very inspiring about this transformation. Beyond basic gentrification, the city has created a fertile art center that gives birth to new ideas and celebrates human possibility and imagination. Using art as a conduit for transforming something so socially and spiritually bankrupt gets Amsterdam big nods, as a conscious culture move done right. 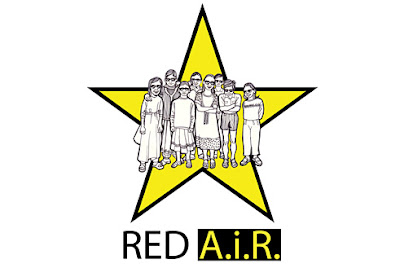 Red Light District is a lifetime experience!
But, to be sure to have a unforgettable time, you should check out this guide: http://www.theredlightdistrictguide.com