Irena Salina's award-winning documentary investigation into what experts label the most important political and environmental issue of the 21st Century - The World Water Crisis.

Salina builds a case against the growing privatization of the world's dwindling fresh water supply with a hard edged focus on the politics, pollution, human rights, and the emergence of a domineering world water cartel.

Through interviews with scientists and activists the film exposes the rapidly building crisis, at both the global and human scale. FLOW introduces many of the governmental and corporate culprits behind this "water grab," while asking it audience to confront the enormous dangers of turning this most precious life resource into a commodity.

What You Need to Know About the Business, Politics and Economics of H2O:

FLOW is simply a must see documentary. To find out where you can see it in a theater in a city near you or to get a DVD copy, go to www.flowthefilm.com 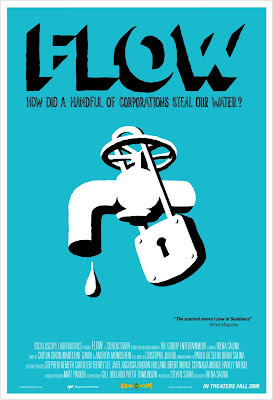