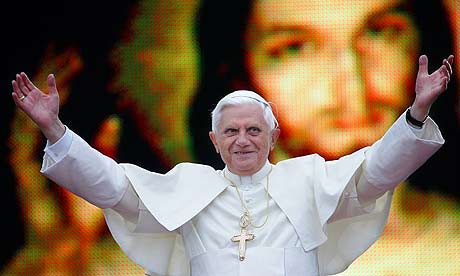 --trends + business + politics--
The pope as the new poster child for solar energy ? It might just be in the cards now that the Vatican has gone solar! The world's smallest country has announced it will be building Europe's largest solar plant.

The 100- megawatt plant is set to open in 2014 will and will generate enough power to supply 40,000 households. This is just the recent of several good green moves by Vatican. Just last year the Vatican installed some 2700 solar panels that were donated by German owned company SolarWorld. The panels now sit on the Paul VI auditorium. The green craze has even changed thinking about the environmental impact of the popemobile, which Vatican spokesperson recently said is under consideration for being replaced by a low carbon electric version. What could we expect next - a Vegan Pope? Anything seems possible now.

Perhaps the Vatican's most impressive move to date was an announcement made last year by Bishop Gianfranco Girotti, the head of the Apostolic Penitentiary, updating the cardinal vices – the seven social sins – by stating that Catholics "offend God not only by stealing, taking the Lord's name in vain or coveting your neighbor's wife, but also by wrecking the environment." Now if only we could work on that little contraception issue to address global overpopulation...now then we'd really be in business.