Oil,Human Rights and The Consumer Addiction: The Riveting Art of R.Lloyd Ming 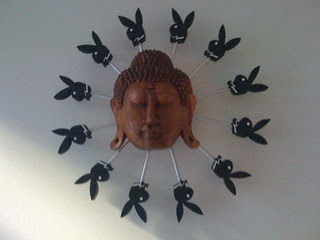 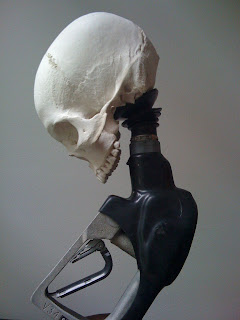 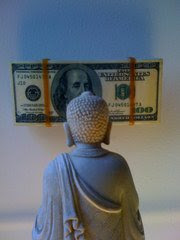 --art + architecture + design--
R.Lloyd Ming, a New York based artist, recently destroyed $12,000 worth of Louis Vuitton Alma handbags all in the name of high art. The conceptual artist had an assistant purchase a dozen of the $1,000 bags at Louis Vuitton's Manhattan flagship to then cut them in half to make a sculpture for his new solo exhibit, "I Am Not Chinese."

Ming's works addresses many controversial Chinese issues including censorship, capitalism under communist rule, trade imbalance and human rights. "America is a nation addicted to credit cards and shopping," says artist R.Lloyd Ming. The artist seeks to "encourage dialogue regarding the issue of America's addiction to consumerism." Ming explains that another one of his works, his Credit Crucifix art, makes us consider the idea of shopping as savior and American consumerism as a savior to China.

What some would say was the controversial high point of the show, a sculpture of a human skull impaled on the nozzle of a gas pump, caused an uproar amongst families of American soldiers in Iraq. According to the artist, the piece serves as a reaction to what many economists believe will be wars in the future over remaining oil reserves. Families of soldiers in Iraq interpreted the skull as representing American soldiers overseas.

"I don't know why anyone would interpret this sculpture as being about American soldiers who have died in Iraq because it definitely is not," says Ming. "My current show is about China and China's relationship with America. To put a sculpture about Iraq in the show would not make artistic sense." Ming apologizes if families of American soldiers who have died in Iraq got the wrong impression. He explains that the sculpture is a commentary on a popular opinion of most geologists; which is that one the day world oil supply will run out. Scientists predict that when that happens war will break out between countries vying to capture any remaining reserves. Since China and America use a majority of the current oil supply, chances are that they may use military action to compete for oil.

The 'I Am Not Chinese.' focuses on what Ming calls the tenuous relationship between China and America, but at the core the exhibit addresses the shifting values of our modern world, asking us to re-examine our values and what we hold most sacred.