The Pesticide Question: The Hidden Risks and Rewards of a Perfect Lawn 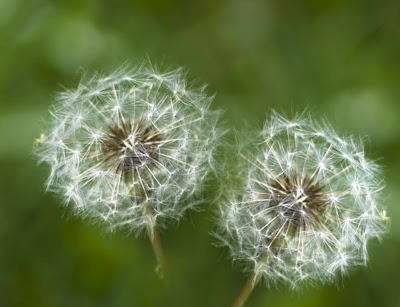 --trends + business + politics--
Big green lawns, perfect and rolling and flawless are the dreams of most home owners coast to coast. But what price do pretty yards really cost us ? The cryptic label on your pesticide of choice holds the answer....and the answer is too frightening for most companies to admit.

Lawn chemicals like glyphosate (Round-up) and permethrin have also been linked to serious adverse chronic effects in humans. Imidacloprid, another pesticide growing in popularity, has been implicated in bee toxicity and the recent Colony Collapse Disorder (CCD) phenomena. The health effects of the 30 most commonly used lawn pesticides show that: 14 are probable or possible carcinogens, 15 are linked with birth defects, 21 with reproductive effects, 24 with neurotoxicity, 22 with liver or kidney damage, and 27 are sensitizers and/or irritants. Those dandelions are looking mighty pretty now eh?

Ontario, Canada has decided to take a stand against such health hazards by establishing a ban on cosmetic pesticides that will take effect on April 22, 2009 – Earth Day. Ontario residents will no longer be able to apply pesticides to lawns, gardens, parks or schoolyards. The ban covers a wide variety of herbicides, fungicides and insecticides that will no longer be available for cosmetic use. More than 250 products will be banned for sale and an estimated 80 pesticide ingredients will be banned for cosmetic uses. The Ontario government is set to announce sweeping new regulations that will prohibit the use of 85 chemical substances, found in roughly 250 lawn and garden products, from use on neighborhood lawns. Once approved, products containing these chemicals would be barred from sale and use for cosmetic purposes.

The Ontario government proposed new regulation (November 2008) containing the specifics of the Cosmetic Pesticides Ban Act, passed last June. There are over 55 municipalities in Canada where the residential use, but not sale, of pesticides is banned. The prohibition of these 85 substances is the latest step in this Act. The proposal contains:

However, golf courses and sports fields remain exempt. The use of pesticides for public health safety (e.g. mosquito control) is also exempt. The proposed regulation would also allow for the use of new ‘notice’ signs to make the public aware when low risk alternatives to conventional pesticides are used by licensed exterminators, such as the use of corn gluten meal to suppress weed germination in lawns.

The prohibition, once passed, would likely take effect in mid-April. Stores would be forced to remove banned products from their shelves or inform customers that the use of others is restricted to certain purposes. Residents must then dispose of banned products through municipal hazardous waste collection, and use restricted products for only prescribed purposes. Errant users would first receive a warning, but fines would later be introduced. By 2011, stores will be required to limit access to the pesticides, keeping them locked behind glass or cages and ensuring that customers are aware of limitations on use before taking them home.

The EU has its own ban on pesticides that is met with both supporters and critics. The EU ban prohibits the use in EU countries of agricultural pesticides believed to cause cancer, reproductive and mutative problems in humans or threaten wildlife. Although the policy appears to be a sound one, critics fear we are failing to see the "big picture," and that the process for arriving and instituting the ban lacked consultation and scientific process. The primary concern of the opposition is that it raises into question that limites public health initiatives such as malaria control which as a result could be hindered.

"The proposed new regulations set a dangerous precedent for the regulation of chemicals around the world and show a worrying lack of concern for the real risks to health and development to which most people in developing countries are exposed," says the petition.

Critics worry that the legislation will limit the supplies of chemicals for public health programs in developing countries because a substantial part of the market would be removed.

The pesticide question remains a complex and heated one. In the midst of policy shuffles what the public is left with is personal choice. Each of us can decide what goes on, or does not go on, our little track of earth. This Spring, take you own stand on the issue as life comes to bloom, make peace with your inner perfectionist and let the weeds go (and in the process save a few bucks in the process).

(Via Beyond Pesticides & Green Muze & Scientific and Development Network)