"We Live in Public" (Dir: Ondi Timoner): Artist Josh Harris on Self Discovery Inside the "Box" 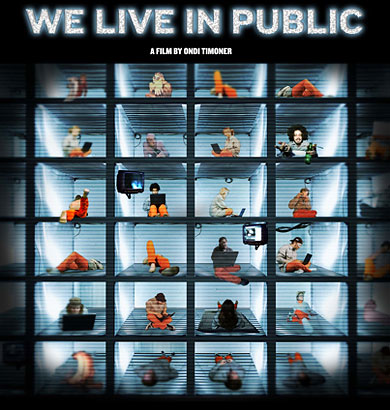 --film + television + print--
Yesterday I had an opportunity to watch the documentary "We Live in Public" by Ondi Timoner. The film exposes the rise and fall of artist and Internet visionary Josh Harris who founded the original online video network called Pseudo.com. Before MySpace, Facebook and YouTube - there was Pseudo, an online entertainment network merging an Andy Warhol sensibility with a Viacom ambition. The film is a raw and riveting trip into the chaos and excitement of the Internet boom of the late 90's, in as much as it is trip into the chaos and excitement of the inner life of Josh Harris.

I am not sure how the film depicts Josh - on the one hand he is a tortured soul struggling to reconnect with himself, on the the other he is an ego maniac manipulating others like marionettes for the sake of his "art" and/or curiosity. It was odd how hard it was for me to watch this film, perhaps because I saw a whole other side of Josh that was a bit lost in the picture. I knew Josh, although not closely, for about two years. He was a former colleague of mine while I had program on Pseudo, called FILM BYTES from 1997-1999. I remember how it all began...

It was a hot day in the summer of 1997 when I walked into Josh's loft on the corner of Broadway and Houston. It had no air conditioning and wildly smelled of cats. I knew little of Josh other than the fact that he had a large loft and was "doing something interesting" in it. My friend Harry Stendhal, who is an art dealer in New York city, advised me to connect with him when I was on a search for a space to run an art auction benefiting the "Green Guerrillas," a guerrilla gardening organization based in NYC.

"You should go meet with Josh - he has space and he is doing something in media up there - although no one seems to know exactly what." Harry said.

At the time I was working in the independent film business in New York city and my curiosity was piqued. Who could he be, an aspiring filmmaker or maybe an eccentric producer/investor ? What gives? After I arrived in the dusty hot loft, furnished with old coaches and busted lamps, I was welcomed by a very pleasant curious man who listened somewhat intently to my pitch, while puffing on a cigar. The conversation went something like this from what I recall...

"It'll be a great event, " I said, "we get to help an organization that is greening our city and help aspiring artists...you can't beat that. I would love your space and your support." I said eagerly (I'm sure).

"Yeah, sure, whatever, you can have the space....but what do you REALLY do?" he asked, while totally brushing aside my well rehearsed "shpeel."

"Well, I have actually been working in the film business for the last couple of years. For the most part I have worked for companies that distribute them. Why do you want to know?"

Josh took me into a back room with a bunch of computers, and pulled up a window that showed an early version of REAL player. It was playing some kind of audio of an interview alternating with music.

"We create shows here, programming, like a network. It happens out a studio in the next room over. It's all in audio now, but pretty soon it'll be moving to video. Do you want to have your own show here at Pseudo ?" he asked. "at what?" I asked. "Pseudo...that's the name of the company."

Three things struck me about this whole exchange and offer: one - what a ballsy guy to make an offer like this to a total stranger who was a relative newbie in the film biz; two-what a bunch of nonsense this whole video on the net sounded like; and last (and perhaps most prophetic on some level) could a "real company" be named Pseudo?

"I'm thinking a film program. You figure it out all the details. If you can create it - you got yourself a show...think about it." he offered.

I later called Harry Stendhal and told him about this wild character I met with his cats, dusty coaches, big cigars and "pie in the sky" ideas.

"Harry - I mean, its sounds interesting...it was sort of like radio on the Internet - but he's gotta be kidding with the whole video thing, right? Is he for real ? What's with this guy anyway ?"

"He's actually a pretty interesting character, and from what I hear has deep pockets. I think he sold another Internet business (Jupiter Communication I later found out)....I am sure he has something up his sleeve. I would really consider it, if I were you."

Two months later I had packaged an idea for a show. It would be called FILM BYTES. I wanted to create a program that would cover the independent film scene from the inside. It would be a weekly radio show on the Internet, that I would host live. I handed over the reigns of the "green benefit" to another colleague and focused on FILM BYTES. I got a well respected law firm to negotiate a deal with Josh (apparently I was one of the only show creators to do so) and pulled together some partners to collaborate with (indieWIRE.com, the now defunct media organization AIVF, Filmmaker Magazine, and Millimeter Magazine). We were off and running, with solid partners, a contract with Pseudo and a vision of a new way to deliver information. Two weeks before we launched, Josh approached me,

"Look we could do this thing in audio, but if you hold off a little bit - we'll get you set with video right out of the gate."

His pie in the sky idea was true (as many would be to follow) and we launched with video at a midnight webcast in October as part of industry bash we hosted with the New York Underground Film Festival. In a tiny studio, with hundreds of people watching from behind the glass of the booth, and a few hundred patiently watching on a perpetually buffering Internet video player, FILM BYTES was born.

The show ran for almost two years and featured a who's who of filmmakers, critics, buyers, and Internet video entrepreneurs. FILM BYTES was one of dozens of shows Josh brought in, that spanned the artful, ridiculous and truly entertaining. A lot of it had questionable programming merit by traditional standards, but the irreverence of the whole spirit of the network created an electric environment that all of us at Pseudo felt every day. And just like for me - Josh gave each person a voice and platform to create something that represented who they are and what they felt was relevant. For me, it was a "professional program" about an industry - for others it was a new stage for poetry, debauchery or experimentation. The point was - he gave each person a canvas, a brush, a studio and a patron; an artists dream. No one was forced to do anything with their platform, perform in any specific way or even felt pressured on the scale of audience they delivered. Josh would later go on to say that Pseudo was a big art project for him...perhaps it was for all of us. The ultimate symbiotic art experiment.

After Pseudo, Josh went on to create other "media art." "Quiet," a controversial "surveillance bunker" and "We Live in Public" where he put himself, and then girlfriend Tanya, on 24/7 surveillance. It was these two experiments that flipped an already skeptical public perception of this outrageous character to the outfield. He was perceived by some as cruel and ego maniacal. Both experiments lead participants (including Josh) to the outer reaches of their dark sides (you'll have to see the film to truly grasp the scope of this). But truth be told, every person participating in his experiments arrived at his door with a hope for either fame or some form of self discovery or self expression. They used his fabricated environments for their purpose, in as much as he created those environments to use them.

The almost two years I spent at Pseudo were exciting and always interesting. Josh was always incredibly kind and respectful to me. I had never actually had a bad moment with him that I could recall, and always found him to be a strangely "tender character," perhaps somewhat misunderstood. It is said that Josh now lives in Ethiopia, perhaps going through some spiritual catharsis, or drumming up his "next big thing"....knowing him, probably both. I think both film, and subject (Josh), present one unavoidable truth of the human condition - our self discovery and evolution comes through our experience and experimentation with others. We are not solitary creatures, we engage with and observe others to better understand ourselves and our world. We all live in public, we always have. Technology has simply made this desire, and this ability to connect (if even viscerally) more accessible. Who we become in its midst, and how we manipulate it, and to what end - is entirely up to us (weather we choose to believe it, or not).

In the mean time, "We Live in Public" (Dir: Ondi Timoner) is making the festival circuit, creating a flurry of interest and activity (the way most things Josh is involved with tend to do), and hopefully will secure the right visionary to help tell the story of a man who knew that one day we would all, even more so, live in public.