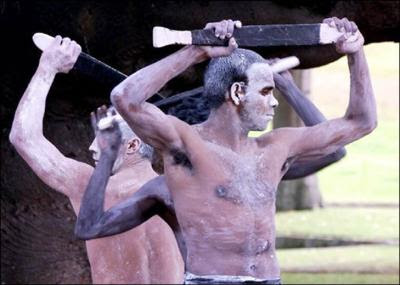 --science + technology + innovation--
Climate change would force Australia's Aborigines off their traditional lands, resulting in "cultural genocide" and environmental degradation, a human rights watchdog warned. Australia's original inhabitants, whose cultures stretch back many thousands of years, Aborigines would be deeply affected by the impact of global warming, the government-funded Human Rights Commission said.

Rising sea levels and soaring temperatures would make their homelands uninhabitable, severing spiritual links and laying waste to the environment, according to the commission's annual Native Title Report. "Problems that indigenous Australians will encounter include people being forced to leave their lands, particularly in coastal areas," the report said.

"Dispossession and a loss of access to traditional lands, waters, and natural resources may be described as cultural genocide; a loss of ancestral, spiritual, totemic and language connections to lands and associated areas." Being robbed of their traditional caretaking role for land and water resources would also result in "environmental degradation and adverse impacts on biodiversity and overall health and well-being," the commission said.

Blood-borne tropical illnesses such as malaria and dengue fever would increase, while food security for subsistence farmers and hunters and gatherers among indigenous populations would be threatened. At the time of white settlement in 1788 Aborigines were believed to number more than one million, but now account for just 2.5 percent of the population, with an estimated 517,000 people.

A quarter of these lived in remote outback and coastal areas, with up to 80 percent of adults in these communities relying on the natural environment for their livelihoods, the report said. They owned, controlled, used, managed or had access to about 20 percent of the Australian continent, and fishing and hunting for food were common activities. Natural resources were also used for commercial activity such as arts and crafts, and tourism.

Aborigines have much higher rates of infant mortality, health problems and suicide than other Australians, with many living in squalid camps where unemployment, alcoholism and lawlessness are rife.