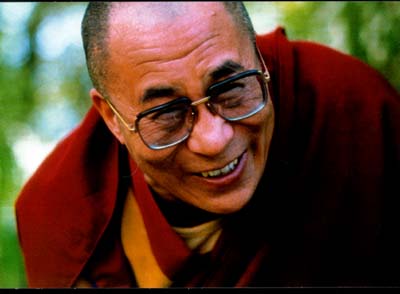 The event, sponsored by the World Ethical Foundations Consortium (WEFC), was His Holiness' first visit to the state capital of New York. Legs folded in an oversized chair at center stage, His Holiness spoke with a comfortable candor, often pausing to laugh and look into the audience. He talked passionately about the importance of ethics in today's world, highlighting it as the missing ingredient in politics, business and religion.

During a news conference preceding the public talk, His Holiness advised that people should be self-reflective and focus on their internal well-being. Instead of placing value on material possessions, people should strive for happy families and compassionate communities.

"We should pay more attention to inner value. Money alone is not sufficient," he said.

At the beginning of the public speech, His Holiness presented his hosts and local leaders with white silk scarves called "kataks," which according to Tibetan culture symbolize purity. Bishop Howard Hubbard of the Albany Diocese, Albany Mayor Gerald Jennings and WEFC cofounders Sara and Clare Bronfman all were presented scarves and remained seated with him on the stage during his speech. At the end of his talk, he addressed several questions submitted earlier by audience members.

When asked why he decided to come to Albany, His Holiness said he met with representatives from WEFC and determined their genuine focus was to promote ethics and it was his moral responsibility, given his commitment to promoting basic human values and secular ethics, to support others doing the same. The afternoon's events were concluded by His Holiness showing his support for Keith Raniere, conceptual founder of WEFC, by calling him on stage and placing a katak around his neck.

About 200 people watched a simulcast of the talk at The Egg at Empire State Plaza in Albany.

His Holiness' visit to Albany was his last stop on a U.S. tour, which also included events in Boston and New York City.

I'm sorry to have missed the Dalai Lama on this tour, so thank you very much for this article.

His thinking (and his personal actions) on ethics and compassion is such an inspiration! He is such a gift to this world.