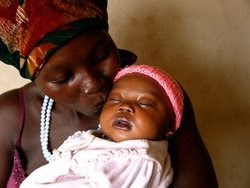 --celebrity + charity + global relief--
Nordic countries lead the globe as the best places to be a mother, while sub-Saharan African countries rank among the worst places for mothers, according to Save the Children's 10th annual Mothers' Index. The global ranking is highlighted in the organization's State of the World's Mothers 2009 report, which focuses on the link between investing in early learning opportunities for young children and school success.

Sierra Leone ranks among the most difficult places in the world to be a mother, according to Save the Children's State of the World's Mothers 2009 report. The Mothers' Index ranks the best and most difficult places to be a mother among 158 countries. Among the top 10 best places: Sweden ranks first, followed by Norway, Australia, Iceland, Denmark, New Zealand, Finland, Ireland, Germany and the Netherlands. Among the bottom 10 places: Niger ranks last, followed by Sierra Leone, Chad, Guinea-Bissau, the Democratic Republic of the Congo, Yemen, Sudan, Angola, Eritrea and Djibouti.

The United States placed 27th for the second year in a row, primarily because it has one of the highest maternal mortality rates among industrialized countries -- 1 in 4,800.

"We call on the world's leaders to take stock of how motherhood and young children are faring in every country," said Charles MacCormack, president and CEO of Save the Children. "Investing in the most basic partnership of all -- the one between a mother and her child -- is the first and best step in ensuring healthy children, prosperous families and strong communities."

* 1 child in 4 does not reach his or her fifth birthday in Afghanistan and Sierra Leone.

* Over the course of her lifetime, 1 woman in 8 will die in pregnancy or childbirth in Afghanistan and Sierra Leone. Compare that to 1 in more than 47,000 in Ireland.

* On average, a girl born in Swaziland will not live to see her 40th birthday. Compare that to the typical girl born in Japan who will live to be 86 years old.

"These statistics go far beyond mere numbers," said MacCormack. "The human despair and lost opportunities represented in these numbers demand mothers everywhere be given the basic tools they need to break the cycle of poverty and improve the quality of life for themselves, their children, and for generations to come."