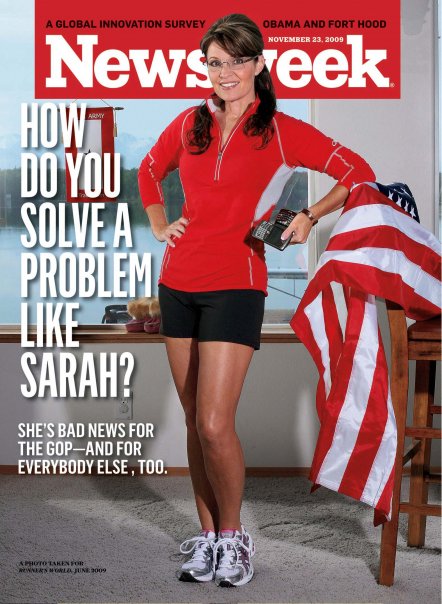 What do you do when your eco-conscious clothing gets popularized by ... Sarah Palin?

Many eco-fashion companies can only dream of getting on the cover of mainstream national magazines — but for eco-ethical New Zealand sportswear company Icebreaker, that dream came true in the strangest, oiliest of ways when the latest Newsweek magazine featured Sarah Palin in Icebreaker’s Long-Sleeve Chase Zip.

Not only can former Governor Palin see Russia, but apparently she can see New Zealand too. It’s great Ms. Palin has discovered the benefits of running in natural, sustainable Icebreaker merino, which doesn’t hold odor like synthetic running tops (made from oil).

As opposed to the ‘Drill Baby Drill’ mantra of the last U.S. election cycle, Icebreaker has been campaigning for consumers to switch from synthetic running tops made from oil.

Last months Newsweek cover photo came from a recent Runner’s World shoot. Apparently Sarah Palin doesn’t wear what she preaches — which sort of bodes well for eco-fashion advocates — and for Icebreaker, whose press release also pointed out that the Long-Sleeve Chase Zip Sarah Palin’s wearing is available in a variety of colors for $99.99 in Icebreaker’s online store.

Icebreaker makes its sportswear from New Zealand merino wool — harvested from sheep that are raised free range on the country’s southern Alps. A big advocate of non-synthetic fabrics, Icebreaker clothing comes with “Baacodes” that let customers track exactly where their clothes originated from.

Whether or not Sarah Palin wears Icebreaker will make the eco-ethical company’s fashion line more or less popular remains to be seen.

I hope that Sarah Palin never goes away. No woman since Eleanor Roosevelt has done more for progressive politics in this country than she. Don'cha just love her? I sure do!