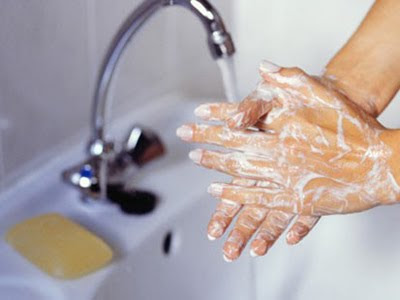 The Wall Street Journal recently reported that several studies of Triclosan, a chemical used in antibacterial soaps, have sparked enough concern to warrant a safety review by the Food and Drug Administration. Bacteria may develop resistance to antibiotics as a result of its use, according to several studies. And in animals, triclosan has been shown to disrupt the endocrine system, which produces hormones. What's more, the agency says that soaps with triclosan do not seem to provide any benefit over using regular soap.

Triclosan was developed as a surgical scrub for medical professionals. But in recent years, it has been added to everything from soaps to clothing because of its antibacterial properties. Triclosan is so ubiquitous that it is found in the urine of 75 percent of the population, according to the Centers for Disease Control and Prevention. The chemical has also been found in about 60 percent of U.S. streams.

Triclosan is a chlorophenol, a class of chemicals which is suspected of causing cancer in humans. While the companies that manufacture products containing triclosan claim that it is safe, the Environmental Protection Agency (EPA) has registered it as a pesticide. The EPA gives triclosan high scores both as a human health risk and as an environmental risk.

Triclosan may be cancer-causing by itself and/or in combination with other substances. In combination with water, it can produce chloroform gas that when inhaled can cause liver problems, depression and cancer. It is suspected that sunlight can transform triclosan to dioxin naturally.

In the U.S., triclosan is regulated by the FDA, as well as the EPA and the Consumer Products Safety Commission. The FDA has been working for 38 years to establish the rules for the use of triclosan, but has yet to finish the job.

In April 2010, Rep. Edward J. Markey (D-Mass.), chairman of the House Energy and Commerce Subcommittee on Energy and the Environment, called for restrictions on triclosan after the FDA acknowledged to him that it was worried about the possible health risks of the chemical. In January, Markey had written to the FDA requesting information about the status of its ongoing review of triclosan in consumer products. He also sent a similar letter to the EPA. The responses from the agencies were less than reassuring.

In its response to Markey, the FDA acknowledged that current data "raise valid concerns" about the effects triclosan can have on humans exposed to it via repetitive daily use. The FDA also stated that it is “not aware of any evidence that antibacterial washes were superior to plain soap and water for reducing transmission of or preventing infection for consumers.”

Because of concerns raised by recent studies, the FDA said it was engaged in an ongoing safety review of triclosan. The agency said its review would take about a year. It is also writing a proposed rule that could potentially limit use of triclosan in consumer products, but couldn’t say how soon the rule would be finished.

The EPA letter released by Markey noted that a review of the substance under the Endocrine Disruptor Screening Program (EDSP) provided evidence of triclosan’s endocrine disrupting potential. However, the letter also noted that the EPA has no plans to re-evaluate its regulations surrounding the use of triclosan until 2013. Additionally, the agency acknowledged that it does not currently set drinking water standards for triclosan, and it does not consider antibiotic resistance as a factor when deciding which chemicals to monitor or regulate in drinking water.

The agencies' responses prompted Markey to urge the federal government to prohibit the use of triclosan in soap, hand wash, products designed for children and those meant to come into contact with food. The representative also said he would introduce legislation requiring the EPA to accelerate its process for testing and regulating chemicals like triclosan.

“Despite the fact that this chemical is found in everything from soaps to socks, there are many troubling questions about triclosan’s effectiveness and potentially harmful effects, especially for children,” said Markey. “There is clear evidence that many consumer products that contain it are no more effective than those that do not. However, triclosan continues to be used in products that saturate the marketplace.

Consumers—especially parents—need to know that many of these products are not only ineffective, they may also be dangerous.”

Here is a partial list of products containing triclosan ( courtesy of Beyond Pesticides.org):
Remember to always refer to product labels to determine whether triclosan is contained in your product.